weblin is active all over the world, as you know. There are downloads from more than 150 countries per week. The asian market is already a-keen-on-virtual-worlds-and-games market, and weblin is the casual and easy layered virtual world ruling regions, step by step. In April 2008 weblin met one of its most active users, Hiro at virtual worlds conference in New York. What happened next is the beginning of a successful partnership. Hiro and Tats visited us in Hamburg in Summer and a few days later work and fun began. Thanks to meltingdots, weblin has a growing and exciting user group in Japan. 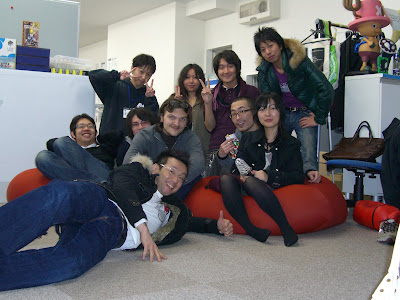 Hiroshi Asaeda, CEO of Meltingdots Inc., Tokyo, Japan wrote us an email and sent over the picture above, the weblin fan crowd in Tokyo: "Here is a photo of the first weblin user meetup ever in Japan. Some active weblin users in Mixi decided to come over to our Office." Hiro is the one in the middle line, sitting on the left.
Posted by interaktivistin at 6:32 AM